Home » Technology News » The monitor of the future? Traveling with a Monitor in Your Pocket

The monitor of the future? Traveling with a Monitor in Your Pocket 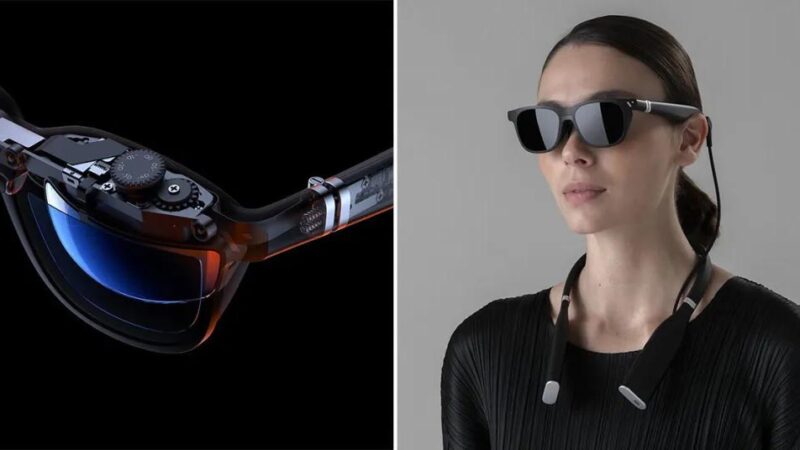 If you want to play games or watch movies on the go, you should only resort to handheld consoles with a fairly small monitor, such as a laptop, tablet, smartphone, or Nintendo Switch or Steam Deck. A giant virtual screen can quickly fix the problem.

More precisely, it’s about the XR glasses Viture One. XR stands for Extended Reality and means you can see the real world in addition to computer generated content.

According to Kickstarter’s description, the glasses are a 120-inch virtual screen that you wear directly on your nose. The right images come either from other devices like the Steam Deck via a USB-C cable connection, or from the right apps for cloud gaming and streaming services that can run over 5G and Wifi as well as the additional neckband.

At just 78 grams, the Viture One looks almost like regular sunglasses, but offers resolutions up to 1080p at 60 frames per second. Normal gaming monitors now reach up to 500 Hertz, but they don’t fit in your pocket.

The neckband weighs 170 grams and with a 3,200mAh battery is said to offer a runtime of two hours for cloud gaming and three hours for watching a video. Images from a gaming PC can be streamed via the Steam Link, Moonlight (Nvidia GPU) and AMD Link (AMD GPU) applications.

Can Glasses be an Alternative to Televisions?

An ad from the manufacturer goes into more detail about how the glasses work, and ironically compares the glasses’ gaming and movie experience to a 120-inch television.

The video has a bit of a worthless character, but you get a good impression of how to use the virtual monitor. As seen in the video, for example, touching the glasses socket will make the screen smaller, allowing you to see your surroundings again without having to take off your glasses.

As expected from a promotional video, it bypasses the obvious disadvantages of glasses compared to television. For example, you need one pair of glasses per person, while several people can watch one TV at the same time.

Another important sticking point is image quality. Without your own test copy, you really can’t judge how well the Viture One does here.

The target for the Viture One Kickstarter campaign was $20,000. With approximately $1.3 million currently raised, the project has already exceeded its target just 22 days before completion.

You can also pre-order the glasses as an early bird version. The cheapest deal is $399 and there are still a few out there. With a neck strap or mobile dock (used to connect to HDMI devices like the Nintendo Switch and Fire TV Stick), the price increases by $100. All three components (glasses, neckband, and mobile dock) start at $599.

Estimated release date is October 2022. But it’s important to be careful with Kickstarter projects, as there is no guarantee that the product will arrive on time or at all. Especially with new technologies, the development and testing phase can take longer than originally expected.

If you prefer a classic monitor instead, the choice is big. My colleague Nils explains why his most important purchase in recent years has been a gaming monitor.

What do you think about monitor glasses? Future-proof technology or pointless gimmick that will quickly disappear again? Your opinion matters!