A video of a Japanese train station went viral because reality and simulation seem blurred here. What's behind it? 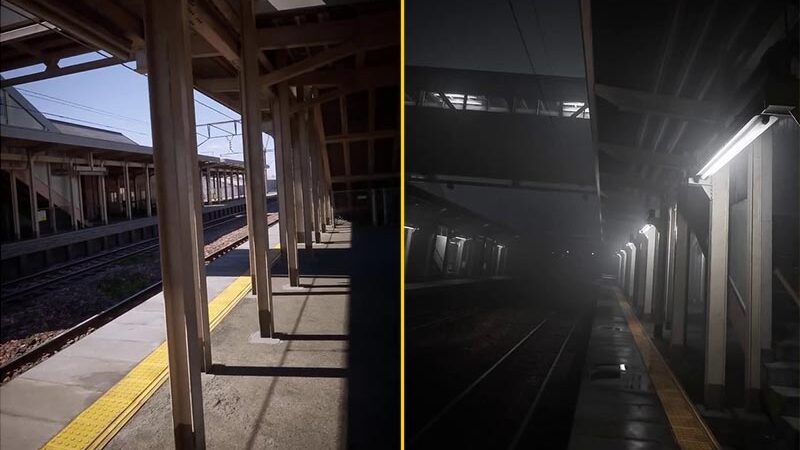 You think you’re looking at the shaky camera footage of a tourist waiting for his train at Japan’s Etchū-Daimon station – until the bright blue day suddenly turns into dark night and the relaxed atmosphere gives goosebumps.

Not only does 3D artist Lorenzo Drago’s video look “incredibly real for a video game”, no, it’s hardly indistinguishable from reality. If it wasn’t for the revealing horror (no jumps) in the second half that made it so viral on social media.

Since the release of Unreal Engine 5, it’s raining down on stunningly beautiful game scenes that were unimaginable just a few years ago. However, there is hardly a project that can shed light on the train station scene in terms of reliability. How did Drago do this? Let’s find out!

No nanites or photogrammetry

When it comes to rendering an extremely detailed environment, many developers rely on the revolutionary nanite technology of the new Unreal Engine. This way, even distant objects remain highly detailed without affecting performance. The same is true for scenes with countless similar objects, such as rocks.

However, for his recreation of the train station in Toyama Prefecture, Drago was able to work with a manageable range of vision, without using technology, and instead chose perspectives that were used very carefully.

What surprised the Japanese, especially those familiar with the area, was that Lorenzo Drago had never visited this platform in his life and yet was able to recreate it so realistically. According to him, there are three main reasons why it doesn’t immediately look like a video game scene.

On the one hand, typical game graphics are hardly noticeable thanks to the high resolution, on the other hand, developers often use wide liberties in proportions to guide the player or highlight interactive objects. On the other hand, he was able to concentrate entirely on reliable odds.

The camera movements would look very familiar, as it recorded using the VR controls. Body movements put into perspective in this way happened quite naturally and didn’t have to be “fake” first.

That the station is so empty is probably due to time rather than technical reasons, as filling it convincingly would definitely exceed Drago’s time frame of about a month.

Initially, he chose the place after accidentally coming across it while searching for reference material. He was immediately struck by the atmosphere of a rural Japanese train platform, and imitating it became an instructive challenge. The engine’s lumen lighting technology has been a huge help, making it much easier to achieve this level of realism.